Latest news from our blog 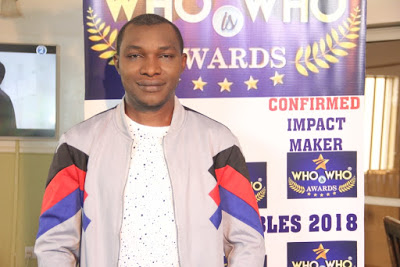 SOLOMON INUSA NYIMLO – THE FEATURE ENTERTAINMENT is a confirmed impact maker on the Plateau with an IMPACT MAKERS AWARD. WHO is WHO Awards ASSEMBLY OF NOBLES 2018.
Check out this Personal Interview as he talks about his role as a leader and his life as an impact maker in Plateau State.
Watch Short video below….

We are determined to Recognise , promote and market those who have been found exceptional in their field and endeavour , we will give a maximum Local, National and international publicity to those who win our awards as we have a firm grip on the Media, we will perform the WHO is WHO Awards®©”.programme in almost every state in Nigeria starting with plateau state. We hereby present to you, the award of all awards , The most anticipated event in every city , WHO is WHO Awards®©”.

by tfe in TFE News & Update

2face Idibia calling on the Nigeria Copyright Commission (NCC) to intervene in the ongoing Copyright Society of Nigeria (COSCON) crisis.